Like several electronic equipment, weighing scales are something you find in almost every household. We are sure that as kids, you may have had the manual weighing scale. They weren’t the most accurate, and as months and years went by, they were almost entirely inaccurate. Lately, digital weighing scales have gained popularity. These models are capable of displaying more than just your weight these days, and the innovation didn’t stop there.

Digital weighing scales have evidently become extremely high-tech and are almost as smart as a smartwatch. In fact, several of them come integrated with Bluetooth technology, and high-end ones even come equipped with Wi-Fi capabilities. The best part about modern digital weighing scales is that they offer almost 100% accurate results.

Unlike previously, where checking weight relied on using a spring scale, modern-day weighing scales only rely on electronic capabilities. The way this works is by the electrical resistances being stuck on materials that are deformable and thereafter running an electrical current through it. This makes it possible for detecting variations of these resistances. These are then correlated to the pressure on the material in order to obtain the weight.

When it comes to checking the progress of fitness and weight management, having a good weighing scale is an absolute must. Checking your weight daily will help you achieve your ideal weight quicker and also helps you in managing your weight and diet better. Hence, we have scoured the market and reviewed a product that may be worthy to consider buying 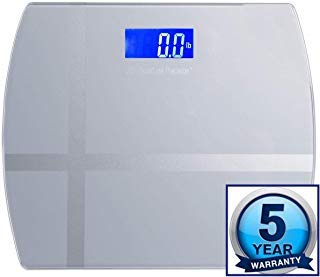 The AccuPoint Precision Digital Bathroom Weighing Scale is one of the best digital weighing scales since it comes packed with a ton of features.

The AccuPoint Precision Digital Bathroom Weighing Scale manufacturer claims that it offers every customer a 100% satisfaction guarantee. That is mainly because this weighing scale has been designed to offer its users the most accurate results. It can even measure precision within two ounces.

The AccuPoint Precision Digital Bathroom Weighing Scale measures things so light because it uses something called the high-precision, strain-gauge sensor system. This is known to be one of the amazing systems for weighing scales. This technology has been created in Germany and is well known for how accurate the produced results are.

The product’s dimensions are 11 x 12.5 inches, and it weighs about 4.7 pounds and can measure weight up to 396 pounds. There is a three-inch large display screen that will make it easy for you to read out the results. This LCD screen has a blue backlight which is bright enough, and the numbers are white in color, making it extremely clear to read even for people who have eyesight issues.

Unlike most weighing scales which have a narrow or a square space to stand on, this weighing scale is slightly larger in size making it more comfortable. Additionally, it also makes it safer to use. You won’t need to be worried about the quality of this product either as it is made out of a highly durable tempered glass which is eight-mm thick.

Ease and Safety of Use

There is often a fear when using bathroom scales because they tend to slip as you step on it if there is water underneath. No longer is that going to be an issue since this sleek weighing scale has non-slip pads fitted underneath it, making it impossible ever to skid. This is great, especially for senior people.

Setting up this weighing scale is a piece of cake. All you will need is an AAA-sized battery which comes included in the weighing scale package. There is also no programming needed nor any setup. To use this scale, you will need to step on it, and it will turn on. Also, once you step off of it, in a matter of seconds, it will switch off; thus, saving battery power.

As an added bonus, the company offers its customers a free ebook called “Maybe It’s Not a Willpower Thing,” as well as a three-month money-back guarantee deal.

The AccuPoint Precision Digital Bathroom Weighing Scale is considered to be one of the best precision systems on the market since it uses German technology. The eight-millimeter glass on this scale is tempered, thick, and heavy duty. It also has a spacious platform making it comfortable and safe to stand on. In addition, the manufacturer put in anti-skid pads on the bottom of the scale.

We compared the AccuPoint Precision Digital Bathroom Weighing Scale to the Triumph Digital Weighing Scale. Other than a black scale with a white floral design, there is nothing much going on with the latter weighing scale. Let us list some of the top comparisons between the two. 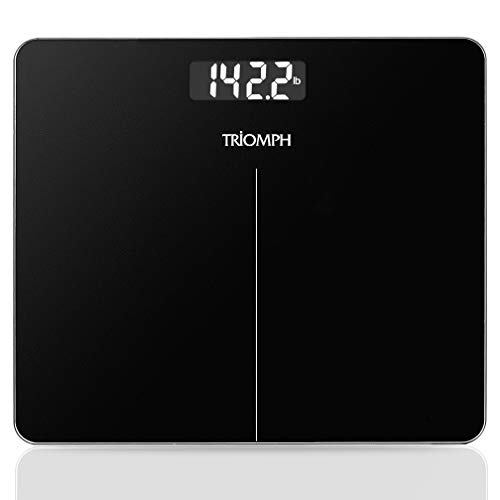 The AccuPoint Precision Digital Weighing Scale is a must-have weighing scale for individuals who are constantly checking their weight or on the path to be fit. It also has one of the most advanced precision systems that is made in Germany and offers users only 100% accurate results. This scale is very compact and can fit comfortably in a bathroom that is small. The brightly lit LCD screen with white numbers makes it easy even for visually impaired persons to read.