Can I use a postal scale to weigh food? If you’re like the rest of us, you’ve asked this question once or twice.

Well, let us tell you now that the answer is yes.

In fact, a postal scale makes an excellent alternative to a kitchen scale. It might even be more accurate at times.

However, there are a few things you have to keep in mind when using a postal scale for measuring food.

Postal and kitchen scales are some of the most accurate weighing instruments available.

They are similar in many ways, but they also have distinct differences.

Let’s dig deeper into the differences between postal scales and kitchen scales.

This way, you can figure out when it’s best to invest in a food scale or stick to what you already have.

What Is a Kitchen Scale?

A kitchen scale is a weighing instrument specifically designed for food.

As such, you will find that standard kitchen scales have a limit of 176 ounces or five kilograms.

Such a low capacity often means high sensitivity levels, allowing you to measure even the lightest items in your recipes, such as herbs and spices.

Kitchen scales usually run on a scale of 0.1 grams.

Furthermore, many food scales, especially the more sophisticated models, can switch between various units of measurements.

For example, you can weigh ingredients not only in grams but also in ounces, milliliters, pounds, and kilograms.

Some models even feature a timer and a clock, which are both very helpful when baking.

What Is a Postal Scale?

Also called a shipping scale, a postal scale is a weighing instrument designed for postal packages.

As mentioned, it has high sensitivity levels and is very accurate.

More often than not, a postal scale has varying weight capacities and designs.

For example, some postal scale models are handheld, while others feature a tabletop design.

However, you might notice that postal scales have bigger capacities than kitchen scales.

That is because they are used for mail and smaller packages. You might find models that can weigh items up to 100 pounds or more.

On the other hand, some postal scales have a very low weighing capacity, sometimes as low as six pounds.

Such scales are used for very light parcels like jewelry.

Where Do They Differ?

At this point, you will have noticed that postal scales are very much the same as kitchen scales.

Still, you’ll see the key differences when it comes to their features.

Thus, if we go back to the question, can I use a postal scale to weigh food? The general answer is yes.

It also works the other way around.

If you have a kitchen scale and need to weigh a parcel for shipping, you don’t have to rush to the store to buy a postal scale.

As long as the package does not exceed the weight capacity of your kitchen scale, it should be fine. 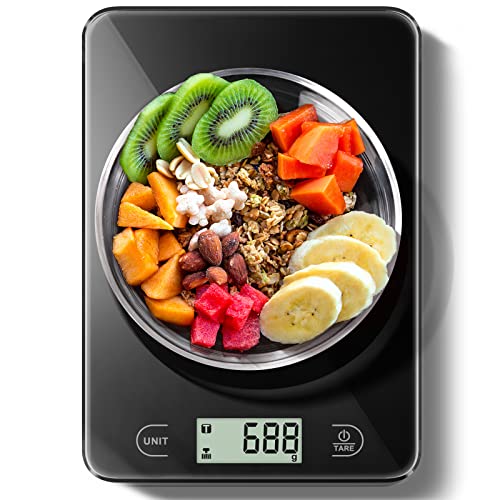 Why You Need To Invest in a Kitchen Scale

Do you plan to use a scale in the kitchen more often? If so, it’s worth getting yourself a good-quality kitchen scale.

This is especially true if you find yourself getting into the hobby of cooking or baking.

Ideally, you’ll want to use a weighing instrument designed for food. Here’s why:

Kitchen scales will get dirty, greasy, and wet.

Because of this, most models come with stainless platforms that protect against water and liquid.

Others have plastic containers for holding dry and liquid ingredients really well.

This is unlike postal scales, which often come with platforms or trays.

If you’re using a postal scale to measure ingredients, place a bowl or container on the platform first and then press the tare button to zero the scale.

This way, you can measure various types of ingredients, even liquid.

Even though postal scales can switch between different units of measurement, they lack specific units that are most useful in the kitchen, such as milliliters.

Thus, if you’re weighing liquid ingredients like milk, water, eggs, or yogurt, a kitchen scale is the better choice.

Aside from milliliters, they can also measure weight in ounces, grams, pounds, and kilograms.

Kitchen scales offer features that help you achieve consistency with your bakes or dishes each time.

Some sophisticated models even have a baker’s percentage feature, which lets you scale recipes up or down based on a ratio.

If you love making bread, you will find this function very handy.

Tips When Choosing a Kitchen Scale

There’s no denying that a kitchen scale makes for a valuable addition to any kitchen.

This is true even if you don’t have plans to become a chef or put up a food business.

Here are some tips to keep in mind when shopping for a kitchen scale:

Your scale will be sitting on your kitchen counter, so it’s a good idea to pick something nice and neat-looking.

Consider the types of food and ingredients you will measure so that you can choose the scale with enough weighing capacity.

For example, if you often cook big batches of meals, you’ll want a large-capacity scale that can handle heavy ingredients.

On the other hand, if you measure a bunch of herbs, your scale needs to be more sensitive.

Note that the most sensitive scales often have small capacities.

Look for additional features that will make your life in the kitchen a lot more manageable.

Screen placement is important too.

You will want a scale with a screen that’s ideally placed so that the results are clear and easily readable.

Can I Use a Postal Scale To Weigh Food?

A postal scale makes for an excellent substitute for a kitchen scale.

Not only is it accurate and sensitive, but it is also suitable for lightweight and heavy loads.

However, if you plan to use one often, it’s best to invest in a reliable kitchen scale specifically designed for weighing food.

Such an instrument comes with features that allow you to make precise measurements, whether you’re dealing with dry or good ingredients in small or big quantities.